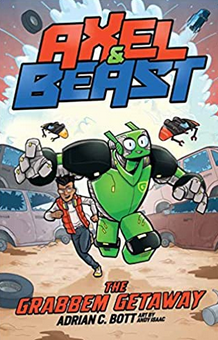 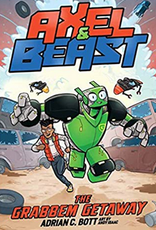 BEAST had a sad history. A greedy, evil company called Grabbem Industries had built him. He was supposed to be a super powered suit of armor that would let young Gus Grabbem Junior help his father smash things up; but when BEAST found out that the things he was meant to be smashing up were things he loved, such as plants, animals and … well … most of nature, he decided to get out.”

BEAST is no ordinary robot, and Axel isn’t your usual gamer. But are they awesome enough together to escape from BEAST’S evil creators?

The Axel & Beast books are packed with super-cool tech, a diverse cast, a lightning-fast pace, and word art and energetic illustrations, along with exaggerated, over-the-top situations – and villains – to keep emerging readers glued to the page.